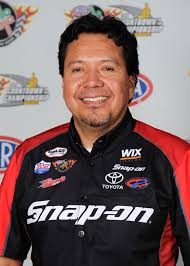 Cruz Pedregon
Cruz has had an outstanding career in drag racing over the years with two Nitro Funny Car World Championships and three US National titles.
As owner/driver of the Snap On Funny Car there comes with it a lot of pressure. After an off season in 2016 the Cruz Pedregon Racing team has been starting to catch up to the type of performance they are used to. They have qualified for the Playoffs that begin following the UN Nationals.

Bill and his bride are making a documentary on the racing life on the late Grant King. They have many of drivers and guys that worked for Grant over the years. Grant was known as a quality builder of Sprint Cars as well as Indy Cars. The guys who drove for and competed against him is amazing.

The number of is driver and competitors that wanted to tell their stories is amazing. The video is nearing completion with several more interviews scheduled there is now light at the end of the tunnel.