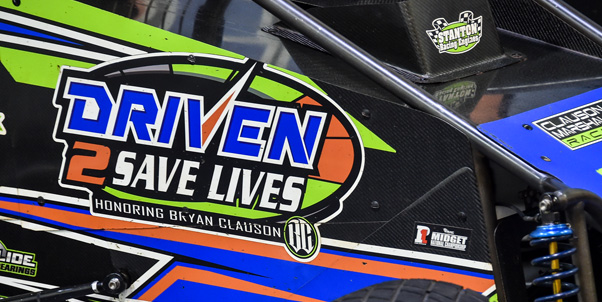 INDIANAPOLIS, Wednesday, Sept. 5, 2018 – The inaugural Driven2SaveLives BC39 presented by NOS Energy Drink will have a fitting pair of honorary race starters in a celebration of the life and legacy of late race car driver and event namesake Bryan Clauson.

Dan Alexander and Dan Gerdes, two Nebraska residents who received life-saving organ donations from Clauson, will serve as grand marshals of the event and wave the green flag on the 39-lap USAC P1 Insurance National Midget Championship feature Thursday, Sept. 6 at The Dirt Track at IMS.

The race on the new, quarter-mile clay oval inside Turn 3 of the famed IMS asphalt oval honors late USAC champion and three-time Indianapolis 500 starter Clauson and increases awareness of the Indiana Donor Network and its Driven2SaveLives campaign. A USAC-record 118 Midget cars are entered.

“Seeing both Dan Alexander and Dan Gerdes wave the green to start this historic race will provide an emotional and worthy tribute in Bryan’s honor,” Indianapolis Motor Speedway President J. Douglas Boles said. “So many members of this record-breaking field knew Bryan well, and they’ll be racing with extra passion and inspiration on Thursday night after such a moving celebration of his living legacy.”

Clauson’s family works tirelessly in support of Driven2SaveLives, a grassroots effort among the racing community to support increased organ, tissue and eye donor registration. Indiana Donor Network and Verizon INDYCAR Series driver Stefan Wilson launched the campaign in April 2016 following the death of his brother and fellow INDYCAR driver Justin Wilson. Today, the campaign honors both Wilson and Clauson. To register to become an organ and tissue donor or to learn more, visit: https://driven2savelives.org/.

Tickets for both nights of the Driven2SaveLives BC39 presented by NOS Energy Drink are on sale now at IMS.com.

All tickets for Wednesday’s action are general admission, with children 15 and under admitted free with an adult.

A limited number of reserved seats are available for Thursday’s action, with general admission also on sale. All seats in the Shaw Grandstand around The Dirt Track are reserved. All fans 15 and under will be admitted free to the general admission area, located in the Northeast Vista grandstands outside Turn 3 of the IMS oval, on Thursday when accompanied by an adult general admission ticket holder.