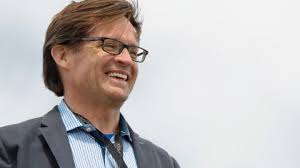 Doug Boles
Graduting from law school it appeared he was preparing to follow in his fathers footsteps, Judge Jeff Boles, but that didn’t happen.
Doug handled the PR for then Marion County Prosecutor Steve Gooldsmith. When Mr Goldsmith was elected Mayor of Indianapolis Doug join his staff to continue the PR. When Mayor Goldsmith left office Doug made another career turn and became the COO of Panther Racing.
Doug joined the Indianapolis Motor Speedway as Vice President. On July 9th of 2013 he was named President. Since that time he has become the most recognizable man and the biggest booster for IndyCar racing and the Indianapolis Motor Speedway.
If IndyCar fans and race fans don’t know who Doug Boles is they have had to have had their head in the sand!

Harding Racing, owned by Indiana businessman Mike Harding (has a technical partnership with Dreyer and Reinbold Racing and shares its shop), with IndyCar veteran Larry Curry serving as team manager and competition director, had not contested a race prior to this year’s 101st Indianapolis 500 presented by PennGrade Motor Oil. Yet, with two races now on their resume, Harding Racing’s No. 88 Chevrolet, in the hands of 23-year-old Gabby Chaves, is making its presence felt.
The two races the team has contested, the aforementioned Indy 500 and Saturday’s Rainguard Water Sealers 600 from Texas Motor Speedway, saw a combined 20 caution periods (11 at Indianapolis, nine at Texas) for various incidents, with Saturday’s race in Texas especially filled with carnage.
Yet, in both races, Chaves survived the chaos to not only bring the No. 88 entry home in one piece, but in strong finishing positions. A ninth-place at Indianapolis was buoyed by a fifth-place run at Texas on Saturday night, completing a remarkable opening pair of races for the young outfit.
Chaves detailed after Texas that the reasons behind their success are actually quite simple: they’ve had solid preparation and have stayed out of trouble.
Larry Curry
Larry has had many years involved in open wheel racing. He has run open wheel cars in USAC and has been Team Manager, Team Director and a car owner in the IRL.
Currently he works for Harding Paving. Owner mike Harding has been involved in IndyCar for many years. With Larry working in the office so when Mike Harding wanted to form his own team he didin’t have to look far to put the team together.
With the teaming up with Dreyer and Rheinbold Racing to operate from their office. The team was of importance as was finding a driver.
When the team was assembled the driver was announced and they planned to enter 3 oval races in 2017… the 101st Indy 500 and the Texas race. Both ended with 2 top 10 finishes, 9th in the Indy 500 and 5th at Texas, to the surprise of many. Next up is the Pocono 500.
See you Tuesday at McGilvery’s Speedway…